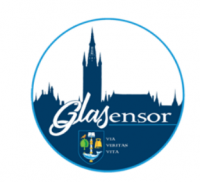 Glasensor is a team from the Universioty of Glasgow competing in the SensUs 2019 event. For SensUs 2019, Glasensor investigated the possibilities for creating a biosensor which is able to measure the concentration of Adalimumab. The full TRD can be found [ via this link]

The primary sensing system utilises a photodetector. Adalimumab is immobilised onto a glass reaction surface whereby the fluorescent thiol-dimane produced by the alkylated thiol groups of the Adalimumab can be detected by the photodetector.

A capture molecule (HCA204, Biorad) specific to adalimumab (ADL) conjugated to a glass reaction surface is utilised as Biorad is able to pull ADL from sample due to an affinity constant (KD) value of 0.06, allowing for high specificity. The washed sample is subjected to a rapid heating and cooling process to promote unwinding and denaturation of both the surface protein and the conjugated ADL. The ADL-HCA204 conjugate is washed with a buffer (e.g PBS) released from a buffer reservoir. This disrupts surrounding free-floating serum proteins and cleans the sample, thereby leaving only the immobilised ADL before introducing the probe monobromobimane (MBBr) to the system. MBBr suspended in the anhydrous buffer (e.g.DMF/DMOS) is released from reservoir and allowed to incubate with the reaction surface. The accessible thiols react with the non-fluorescent MBBr, displacing the bromine and creating a fluorescence which can be detected with ex.394nm/ em.490nm.

A photodetector detects the fluorescent thiol-dimane conjugate that is produced once MBBr has alkylated the exposed thiol groups of ADL. These conjugate products give a fluorescent emission at wavelength ~490nm when excited by a wavelength of ~394nm. The reaction surface is an activated glass slip which has been salinized and is coated in an adalimumab (ADL) highly specific mutant (HCA204). This = mounted inside a dark enclosure to maximise the photodetector’s ability to read the fluorescent output. The output is correlated with a premade curve relating the number of visible thiols with the ADL concentration.

The cartridge consists of two triangular shaped reservoirs containing the wash buffer and tag respectively and two rectangular waste reservoirs. These are connected to a reaction site in which the sample is placed. The volume of reagents held by the reservoirs are approximately 200μl. Capillary forces are used to transport the reagents in the microchannels to the reaction site. Heating elements are located under each waste reservoir and the main reaction site. A capillary flow can be generated when a microchannel is wettable, i.e when the combined contribution of its four walls generates a negative capillary pressure pulling the liquid inside the microchannel. Negative potential in the walls of the channel are created by applying heat to the bottom of the waste reservoirs, using a Peltier device, and inducing evaporation of the liquid from the waste reservoir. This allows the reagents to continue moving across the channel via capillary flow. Flow rates achieved are in the range between 25 to 96nl per second. The circular shape of the reaction site ensures equal distribution of the reagent within it. The cartridge will be made using heat resistant plastic, such as Polymethylmethacrylate (PMMA) or Polyethylene Terephthalate (PET) to withstand heating at approximately 100°C. This material allows for reduced cost of manufacturing and convenient disposal of the cartridge.

The device will be approximately 21 x 30 x 40cm in size and designed for bench top use. The temperature control system, power supply and detection system will be enclosed within this instrument. An LCD screen will be placed on the outside of the instrument to display instrument status and final results to the user. The one-use disposable cartridge will contain the required reagents enclosed within. The user will apply sample volume (~15ul) to the reaction site in the centre and seal the cartridge with PCR film. The cartridge will be inserted into the instrument and secured in place by the user using a manual lever system. The user will then prompt the instrument to start analysis which is an automated process. The final result will then be displayed on the LCD screen. A full data folder can be transferred from the instrument via bluetooth for further and more detailed analysis of the results.