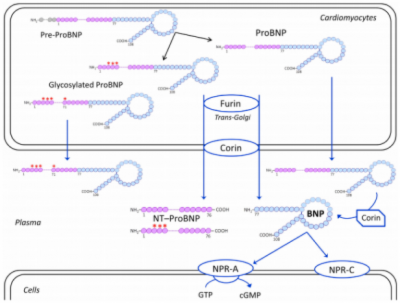 The biosynthesis of proBNP and its derivatives.[1]

Brain natriuretic peptide or B-type natriuretic peptide (BNP) is an endogenous polypeptide that is secreted by the heart ventricles in reponse to excessive strain on heart muscle cells. The name stems from the original discovery of the molecule in procine brain extracts. In humans, BNP is mainly produced in cardiac ventricles. The release of BNP is modulated by calcium ions.[2]

BNP and proBNP contain a ring structure formed by a disulfide bond between two cysteine residues. The ring structure is essential for the biological activity of the molecules. BNP and, to a lesser extent proBNP, are active ligands for the natriuretic peptide receptors A and B (NPRA and NPRB). These receptors are guanylyl cyclases. BNP and proBNP have a much stronger effect on NPRA than on NPRB. BNP is closely related to atrial natriuretic peptide ANP, having similarities in function and structure.[2][5][6][4]

ProBNP produced in cardiomyocytes can either be processed into NT-proBNP and BNP within the cell, or can be secreted as an intact proBNP peptide. Especially when the Thr71 is glycosylated the latter seems to occur. In patients with heart failure (HF) the greatly increased production of proBNP can even lead to the secretion of non-glycosylated proBNP. The natriuretic peptide clearance receptor (NPRC) clears the natriuretic peptides by sequestering and/or internalizing the peptide. NT-proBNP is not cleared by NPRCs but instead is thought to be cleared mainly by the kidneys.[4][8]

ProBNP, BNP and NT-proBNP can all be found in the plasma of healthy individuals. ProBNP can also be cleaved after secretion whilst in circulation.[4] BNP is rapidly degraded in vivo by peptidases such as dipeptidyl peptidase IV and neutral endopeptidase. There is no confirmation whether enzymes such as meprin can degrade this peptide hormone in humans. It is also suggested that aldehyde protease can cleave BNP at arginine sites.

The eventual effect of the pathway involving BNP and proBNP is that it increases natriuresis and the dilation of vascular smooth muscle, reducing the effective circulating blood volume as well as the blood pressure.[2][9]

The table below shows the reference values for BNP and NT-proBNP.

Concentrations of BNP and NT-proBNP are influenced by age, sex, renal function and obesity.[4][8]

The concentration of BNP in blood is unstable due to protease activity. NT-proBNP is also affected, but to a lesser extent.[7][8]

BNP requires plastic collection tubes and NT-proBNP can be collected in either glass or plastic. For BNP the only reasonable choice is EDTA stabilized whole blood or plasma. For NT-proBNP either serum, heparin plasma or EDTA plasma should suffice, although EDTA gives 10% lower results on tests.[8]

State of the art sensing methods

SensUs focuses on measurement systems that are small and that can be used at the side of patients and at home.

There are presently three systems on the market for (NT-pro)BNP testing that are intended for handheld use:

The abovementioned systems are all based on antibody sandwich assays, but they use different readout mechanisms. More information on these assays follows in the next Section.

The precision of concentration determination (CV=coefficient of variation) of these systems is typically about 10%.[14][15][17]

BNP was first described in 1988 by Sudoh et al. who found a natriuretic peptide in a porcine brain similar but not equal to the then known atrial natriuretic peptide ANP.[18] In 1995 it was hypothesized that since proBNP is cleaved resulting in a C-terminal active part called BNP-32 or simply BNP, there should also be an N-terminal part. Hunt et al. tested this hypothesis and indeed found what is now known as NT-proBNP in human blood plasma.[19] In 2008 Seferian et al showed that the central region (28-56 aar) of NT-proBNP is glycosylated, whereas the C-terminal portion of the molecule (61-76 aar) is mostly free of O-glycans. [20] Intact nonprocessed proBNP was also found to be present in the circulation. [21]

To measure BNP and NT-proBNP, a combination of size exclusion chromatography, reverse phase high pressure liquid chromatography (RP-HPLC) and a radioimmunoassay (RIA) was used. For the RIA synthesized BNP molecules were iodinated to obtain a standard curve, which could then be compared to plasma samples that went through the same process of SEC, RP-HPLC and RIA.[19]

Already in 1999 the first sandwich immunoassay was developed using antibodies and streptavidin-biotin interaction.[22] Measurement by immunoassay is now the golden standard and the advantages compared to the SEC/RP-HPLC/RIA process are that immunoassays are faster and easier to perform. 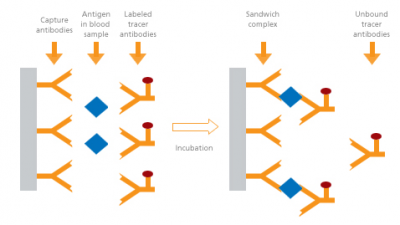 The principle of a sandwich immunoassay is that a biomarker is captured between two antibodies that are both specific for the biomarker. One of these antibodies is attached to a solid base (capture antibody). The biomarker attaches to this antibody and the area is washed so only the bound (relevant) molecules are left. Thereafter a solution containing another antibody specific for the biomarker is added. This antibody (detection antibody) has a label attached to it, for instance an enzyme or a fluorophore. After a second washing step only the antibody/biomarker/antibody sandwiches are left. In case a fluorescent label is used, light with a specific wavelength excites the fluorophore and the intensity of the emitted light is measured. By comparing these values to a standard curve, the intensity can be linked to the concentration of biomarker in the sample.

Abbott’s i-STAT BNP test cartridge uses a sandwich ELISA (enzyme-linked immunosorbent assay) with an electrochemical sensor. This sensor is coated with antibodies to which the BNP binds when the sample is added. The second antibody is conjugated to an alkaline phosphatase enzyme and this conjugate complex dissolves into the sample once it is loaded. The wash fluid that is used to remove the remainder of the sample and unbound antibody/enzyme conjugate contains a substrate for the alkaline phosphatase enzyme. Enzymes that are part of the antibody/BNP/antibody sandwich are not washed away, so they can cleave the substrate present in the wash fluid and as a result release an electrochemically detectable product. The electrochemical (amperometric) sensor measures this enzyme product, and the signal is proportional to the concentration of BNP in the sample.[24]

The Roche cobas h232 point of care system uses a sandwich immunoassay with gold nanoparticles as labels. A test strip (CARDIAC® NT-proBNP assay) contains monoclonal and polyclonal antibodies against epitopes of the NT-proBNP molecule of which one is gold-labelled and the other biotinylated. The optical system of the instrument detects and measures the intensity of the signal line by means of a digital camera. [25][26]

The Samsung LABGEO IB10 is an NT-proBNP measurement system that has recently come onto the market. We have not yet been able to find which assay principles it uses.

In the future the point-of-care testing devices will become smaller, faster, easier to use (e.g. finger-prick based), and more economical, so that testing can be done at any place and even at home. The use of the devices and the test result must become very simple and intuitive. In the far future, devices may also become available for in-vivo sensing, i.e. sensors worn on or in the body, much like present-day subcutaneous sensors for continuous glucose monitoring.